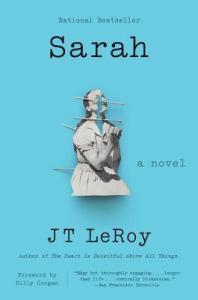 “I convinced myself I was like a comic book hero, hiding in the shadows, my magic stiletto heels clicking away all evil.”

Pages: 160
Format: Paperback
Genre: Fiction, Contemporary, LGBT, Queer, Dark-Fiction
Contains: Prostitution, Child Abuse, Drug Abuse, Sexual Content, Violence.
I initially sought after this book after a Life Writing lecture at University, having watched the documentary on the controversial life of JT LeRoy, and the hoax revolving around the writers identity. I picked up this book knowing it was a work of pure fiction, however, the book wasn’t as exciting as the lecture made it seem.

The premise itself of the story is interesting and had potential, telling the tale of Cherry Vanilla, a child prostitute – posing as a female – who aspires to be alike his “Lot Lizard” Mother (Sarah), and runs away in the hopes of learning more on how to do so. He ends up working for another group, who mistakes him for a Saint due to the fact he doesn’t ‘bleed’ until the end where his sex is discovered and are treated a ‘Snake’ until managing to escape. Admittedly, a ridiculous story, yet I felt it could have worked if there was more pace and detail to the tale.

The entire idea of the story is ridiculous; the characters, the created colloquialisms- some of which is hardly intelligible, the plot. However, in a way LeRoy has managed to make it work, and in others they haven’t. Cherry Vanilla’s innocence and desperation for affection is understandable due to his mother’s neglectful upbringing. So, as a character, he works. However, the premise of Saints and Snake’s was lost on me, and felt as if it could have been spread out amongst further pages. There is simply too much information to process in under two-hundred pages. However, there is the option of it being shortened into a flash fiction, having ignored the idea of Saints entirely and concentrated more on characters. In a short amount of pages, characters introduced at the end were forgotten entirely until their heroic return at the end of the book; their dramatic rescue was lost on me purely because their importance to the story was so little! However, one of the main issues I had with Sarah was the page layout of my edition; there is no chapters, simply a long block of text from start to finish – with paragraph spacing to break up scenes. It might just be my personal preference when reading, yet if a book is physically attractive and easy to take breaks between reading, I find it easier to make it through to the end. With this book, I’d struggled through it for far too long for such a supposedly short read.

Regardless of my mostly negative opinion, Sarah was worth the read, simply because it helped me understand my lecture better.