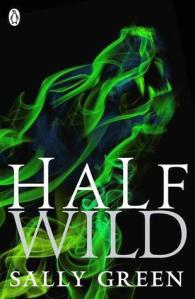 “The point of being good is doing it when it’s tough, not when it’s easy.”

Series: The Half Bad Trilogy
Published: 2015, by Penguin
Pages: 402
Format: Paperback
Genre: Fantasy, Young Adult, Paranormal, Magic, Romance
Contains: Violence/Torture/Abuse, Death, Mentions of Blood/Gore, Cannibalism.
Half Wild is the continuation of the first of its series, Half Bad, being set in modern day, England, with a population consisting of Witches and Fains. The story begins with Nathan’s quest to find his friend – and later love-interest – Gabriel, before continuing to tie up any lose ends from the first book, Half Bad, with intense violence and multiple cliff hangers. It then begins to set up for the final book with the development of  Marcus and formation of the alliance. Throughout the story, however, is Nathan’s battle to accept and control his gift, which is finally revealed in this instalment of the series (and cleverly hinted at on the cover).

As someone who had fallen in love with Nathan Bryn from the very first page, Half Wild further fuels my adoration. With his book, Nathan has shown more maturity from the horrors he’s witnessed, seeming to accept his experiences and learns from them. Although, his anger is still present and growing. One of the main reasons for being easily in love with his character is his voice, being so uniquely written with the use of the first person and having helpful typography in places – “chchchhhhchchchchh” – leads his character to be so easily understood. Although, I’ve read multiple criticisms of this use of language, I found it one of the reasons why these books are so easy and enjoyable to read.

However, one of my favourite aspects of this book is surprisingly the love triangle, consisting of Nathan, Gabriel and Annalise. It’s one of the first I’ve read where the plot line isn’t cliche or boring to read. The LGBT+ representation is used beautifully when describing the romantic interactions between Nathan and Gabriel, presenting them expertly as one man who knows and prides himself on his sexuality, and another who is confused and denying his feelings. This may appear cliche, yet Sally Green’s explanation of Nathan’s emotions and thought processes creates an unpredictable outcome for the remainder of the trilogy. Although, his relationship with Annalise is heartbreaking, having Gabriel being led on whilst his relationship with her blossoms. Gabriel always responds with how he’d follow Nathan until death, and although he must be heartbroken watching their relationship, he still does just that. He’s definitely my favourite character of the series.

Half Wild not only develops characters from book one, it also introduces two more important ones; a powerful Black Witch, Van, and her assistant Nesbitt; a half blood. Van’s character is wonderfully written, being shown as an intelligent and incredibly mature Witch, who at first appears somewhat suspicious but redeems herself as the story continues. The same is with Nesbitt, as although, he’s the comic relief of the series, his comments were initially surprising, being taken as rude and harmful, yet Nathan eventually begins to retort and forms a sarcastic comedy act between the two of them.

However, the most shocking realisation for me whilst reading was how little I despised Marcus. His character is explored deeply in Half Wild, as him and Nathan ‘bond’ over the alliance and they each learn more about another. Regardless of Marcus’ past, his personality shines through as a lonely man who is unable to trust or show respect to others due to having met very little who do so to him. Regardless, in this book it’s very clear how much he cares for Nathan, and states he’s with the alliance to kill, yet it’s obvious he’s there for his son, also.

I love this book. I love the characters, the plots, the language. I love the cliffhangers, the twists, and the overall beautiful cover. I can’t recommend this series enough, and I’m so excited to get my hands on the final book.

One thought on “Review: Half Wild | Sally Green”