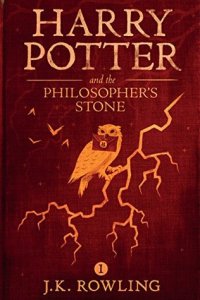 “It does not do to dwell on dreams and forget to live, remember that.”

‘Harry Potter and the Philosopher’s Stone’ is the first of the modern classic seven book series. It introduces Harry Potter, an eleven year old boy who receives a letter from Hogwarts School of Witchcraft and Wizardry, a boarding school for young magic folk wishing to learn the craft. Alongside his studies he meets Ron Weasley, a fellow student of Gryffindor House, who becomes his fast friend, and Hermione Granger, a bright, yet apprehensive fellow student who eventually joins them in their adventures.

It felt almost wrong having my own book blog that has yet to mention my favourite childhood series, so I jumped at the chance to reread them. Although, it was a different experience from when I was younger, they still haven’t moved from the space in my heart dedicated to them.

Harry Potter himself is a unique character, completely different to Daniel Radcliffe’s portrayal of him in the movies, and quite often I forget how lovable he is in the books. His personality isn’t as dry and dull as the adaptations have made him. In this book he’s full of this adorable, childlike wonder at the sudden change in his life, being maturely grateful for the opportunity yet also holding childish traits to his chest. This book has continuous, subtle reminders of the fact that the boy who experiences so much danger is still a child, whether it be his dialogue, mannerisms or his internal monologue.

I adore the plot to this story, finding it an incredibly addictive introduction to the Wizarding World and leaves readers desperate to move onto the next immediately. The story is a beautifully crafted intro to not only the world and Harry’s character, yet also to the forming relationships with his teachers and peers. Hermione’s progression from the start to the end of the book is a great example of this, as there is a large quarter of the story where she’s despised by her peers for her knowledge, until the end where it’s necessary for their survival of the tasks leading to the stone. Albus Dumbledore’s character was one I found myself surprisingly loving during this rereading, as I’ve always disliked him as a teacher, yet in the books his quirky dialogue was one I found myself chuckling away to.
However, my ultimate favourite characters of the story were, and probably always will be, the Weasley Twins, who have a surprisingly large part in the books, reappearing on occasion to add a lighthearted twist to the tale before disappearing again – .

Overall, I’m so glad I returned to this series, having missed the beautiful concept and all it’s lovable inhabitants, and will definitely consider continuing my reread soon.