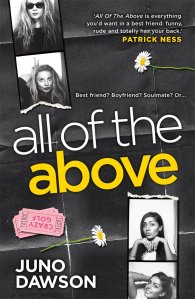 “When you take away our bodies and our names, all that’s left is the feeling. And the feeling is like warm honey.”

‘All of the Above’ tells the story of Sixth-Form new girl, Toria, who becomes acquainted with the ‘misfits’ of the school, and she meets Nico, vocalist of a local band, and Polly, a loud-mouthed dream girl. One after another problems ensue, making a positive climax near unimaginable. Split in four sections throughout a college year – Autumn, Winter, Spring, and Summer, it follows Toria as she discovers her sexuality, while also attempting to maintain new friendships and pass upcoming exams.

I wanted to like this book, it being one of the first, full-length, lesbian novels I’ve read. Unfortunately, that wasn’t the case. In fact, the more I delved into the story, the more it seemed to give me more reasons to leave it unfinished.

The beginning of the story started strong, delving immediately into Toria’s first day and being introduced to Daisy, a bubbly, adorable character. However, soon after small snippets of the protagonist’s opinions began to become a little too infuriating to move on from. As a book with themes revolving around the idea of teenage mental health, and having crucial characters to the plot suffer with certain illnesses, it had lines such as;

“I knew this was borderline mentally ill, but my mind was galloping way ahead of itself.”
(Page 49)

There are multiple more instances where mentally ill’ and ‘kill myself’ were used in, i’m assuming, humorous intentions; however, these two were the ones that made me most uncomfortable. Regardless of Juno Dawson’s intention, Toria’s response to these terms weren’t clarified as being wrong. For instance, when a character known as a school bully uses homophobic slurs, the character itself is an indication that using this terminology is wrong. In ‘All of the Above’, however, the one who uses these words is the hero of the piece, meaning this is being portrayed as an acceptable thing to do.
Further in the book, we’re introduced to Nico, the male love interest of Toria, and although, the writer points out the fact that it’s love-at-first-sight and somewhat cliche, the instalove is still not any less boring. Plus, regardless of how Nico is described as ‘cool’ and ‘dreamy’ because of his career path, he’s still a dull character with no purpose other than to delay Toria discovering her sexuality. Following on from this, the descriptions of intimacy between the pair are too embarrassing to ignore. Although, the narrator’s voice is intentionally childish as she’s around 16/17 years old, I hardly think it excuses possibly some of the worst sex scenes I’ve read in Young Adult Fiction. “We had a tiny bit of sex.” (Page 167); this line alone is enough to make me cringe, as writing a teenager who is no longer a virgin, surely she’d have more words to describe the act than this. Plus, if she’s writing this, maybe she’s too immature to be having sex.

Some of the characters are adorable, which is why I had such a difficult time writing this review. It’s not completely terrible, the character Daisy, for instance, is one of the reasons why I continued regardless of how infuriating I found everything else. As a character that is introduced as being alike Harry Potter’s Luna Lovegood, it was difficult to find a fault. However, Toria’s character was the opposite for me; I couldn’t stand her. If her cringe-worthy comments about her interest in sex wasn’t enough, her initial attitude towards her friends mental illnesses was. At the first mention of Polly’s self-harm, she begins to question why anyone would do such a thing to their body, commenting how scary she found it. Following on from that she also has no idea how to cope with the news of Daisy’s hospitalisation, meaning she storms out the room feeling sorry for herself for her friends hiding her illness from her. She’s one of the most selfish protagonists I’ve read for a long time, and the fact it’s themed around such an important issue disgusts me to see it written such a way.
The writing of Polly’s character was slightly different to the others, and I still can’t understand why. Whenever Polly curses, asterisks would replace the word, making the reading time longer as there are multiple profanities with four or five characters and having to decipher every line of dialogue was infuriating. However, if another character did so, there wouldn’t be anything replacing it, making it completely irrelevant to do so for Polly. If you wanted to write a character with a foul-mouth, simply making them curse would have the same effect as if you were to use asterisks.
The characters as a whole didn’t seem to have much personality other than the names assigned to them; they each embodied the issue they were assigned. Beasley was ‘The Gay Best Friend’, Nico ‘The Hot Rocker Boy’, Polly was ‘The Manic Pixie Dream Girl’, Alice ‘The Asian Anime Lover’, Freya ‘The Shy Bookworm’ and even the lovely Daisy was simply created to cause more drama after her death.

This book isn’t the picture perfect representation for sexuality, and although, I’m happy to have stories where characters discover themselves – it’s important for those with little understanding to see how difficult it can be – I wouldn’t recommend this one. Throughout the story the idea of gay and lesbian were accepted by the protagonist, yet when discovering her own the idea of bisexual was rejected and ignored until she simply accepted a relationship with Polly without a label. Personally, this presents itself to me as a character who doesn’t feel bisexuality is a valid sexuality, and left me uncomfortable. Plus, the continuous conflict with herself lasted the last 100 pages of the story, until being quickly resolved at the end with the last two chapters, which was needless and a little too cliche, seeming much alike the instalove with Nico all over again.

Regardless of how cute the poetry was in places, and how much I loved Daisy, this book was a mess. There was too much of every representation, trying to find every relatable aspect for teens, meaning the quality suffered for it.

3 thoughts on “Review: All of the Above | Juno Dawson”