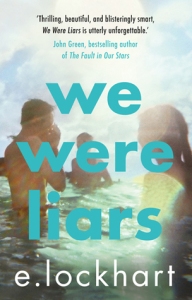 “We are liars. We are beautiful and privileged. We are cracked and broken.”

‘We Were Liars’ tells the story of Cadence Sinclair’s life and her extremely wealthy family, following an incident during summer fifteen, which resorted to her suffering from amnesia. This book follows her life after the traumatic events, towards her regaining her memories whilst on a private island with her loved ones.

I began reading this book after a recommendation, and having read so many mixed reviews I wanted to discover my own. Although, it’s been known as a bestseller and infamous throughout the Young Adult genre, I personally couldn’t understand the hype.

The book starts in a fairly daunting way, giving you a map of the family estate and a family tree with all characters who fit into the two-hundred page book. Regardless of that information, I still couldn’t remember all the character names and in what relation they were to the protagonist. Half of the characters were completely unnecessary to the plot and could have been scrapped completely, which only added to my frustration whilst reading.
The protagonist herself fulfilled the spoilt-rich-kid stereotype, and it wasn’t endearing in the slightest. Cadence’s selfishness glowed through the pages for its entirety, which didn’t help the reading process as there was multiple occasions I felt like leaving it unfinished. It wasn’t solely her, the entire cast of characters lacked the slightest of compassion, and I can’t understand what the purpose of this book is or how it became so popular with characters who have no redeeming factors whatsoever.
Herself and three others (cousins?) were known as the ‘liars’, for reasons I don’t understand. Throughout the book there were few occasions, if not more that I skimmed through, where they told small lies to parents or friends – which most teenagers have been known to do. However, that was all.

The writing itself was also a huge letdown, having read so many reviews which describe it as ‘beautifully’ or ‘cleverly’ written. However, the choppy syntax and attempts at poetic writing were all I found throughout. The most irritating technique within the book, was the way in which the E. Lockhart styled their sentences on occasion. At, what I see, random times the writing would move onto another line whilst in the middle of a sentence, as if it appeared like a stanza of poetry, and it’s such a meaningless and irritating technique. Here’s an example;

“Finally I said something about
what if
what if
we took it into our own hands?
and Gat said,
How?”
(Page 179)

Personally, I see no reason for the layout of this text, or the purpose of repetition. It’s written as a piece of first-person prose, and I’d have rather read the story of Cadence and Gat’s relationship without pointless poetics. Then maybe there’d be signs of emotion.
Another fairly irritating technique I found was the amount of sudden metaphors. Throughout the piece Cadence refers to her emotional, and sometimes physical, pain with a violent metaphor. However, there was no indication that this description wasn’t to be taken in a literal sense. For instance, when describing her father moving away;

“He had hired moving vans already. He’d rented a house, too. My father put a last suitcase into the backseat of the Mercedes, […], and started the engine.
Then he pulled out a handgun and shot me in the chest. I was standing on the lawn and I fell.”
(Page 5)

This description is on the third page of the book, and the interaction is the introduction to her father. I’m unsure whether I’m simply too stupid to read this as I taken the shooting as a literal event, rather than metaphorical. However, considering I had only seconds been introduced to Cadence’s father, how was I supposed to know whether or not he kept a handgun in his car? The use of the metaphor is complicated and meaningless, there’s no reasoning for not describing the heartache of her father leaving her in a casual sense.

Overall, I personally didn’t enjoy this book. The multiple complexities throughout the story was unnecessary and often confusing, and the ‘twist’ at the end was too cliche and lazy for my liking, regardless of my love for unreliable narrators.

3 thoughts on “Review: We Were Liars | E. Lockhart”