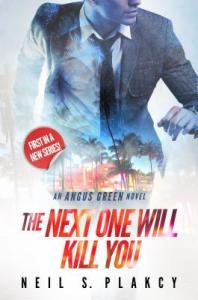 “You all right, rookie?” Vito asked, leaning down toward me.
I nodded. “Yeah,” I said. “It’ll be the next one that kills me.”

‘The Next One Will Kill You’ is the first instalment of the Angus Green series, and tells the story of a newly recruited FBI agent’s biggest case. Angus Green is an homosexual FBI agent from Miami, trusted with his first case to chase a gang of criminals, where his sexuality soon becomes an asset to the investigation.

I first found this book when searching an LGBT crime novel, seeking a happy homosexual protagonist whose life didn’t depend on his sexuality… and I’m so glad I found Angus Green.

The main factor of this story is the protagonist, the novel moving along with Angus Green. He’s proud of his sexuality, charismatic and intelligent, meaning reading his narrative was interesting and easy. Angus’s interactions towards the other characters were fun and refreshing to read, seemingly lighthearted regardless of the story’s genre. The relationship between Angus and Danny was wonderful, their interactions relatable of those with siblings and Angus’s protection over his younger brother was sweet to read. However, the evolution of his relationship with Lester was possibly my favourite, being fast paced and showed them moving from hooking up to a more established relationship. Although, it threw Angus initially, by the end of the novel he appeared open to seeing him again, and Lester’s trust of him throughout the story highlighted a healthy homosexual relationship. Finally, an LGBT relationship that worked!

However, personally I felt as if the main criminal plot-line of the novel lacked something to grip my interest. There were numerous occasions where I found myself skimming through the the process of uncovering the crime, being more interested in the relationships and humorous dialogue between the characters. Yet, I still found the story easy to keep up with, so it wasn’t too much of a bother.

Overall, I enjoyed this book. The story was fun and the characters moved the story quickly. Although fast-paced, it kept me interested to the end. Plus, the beautiful cover looks perfect on my bookshelf.

2 thoughts on “Review: The Next One Will Kill You | Neil S. Plakcy”