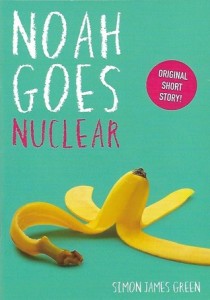 ‘Noah Goes Nuclear’ is a short story of the quirky world of Noah Grimes. Off on a Geography trip, Noah is simply excited to spend a quiet evening in the hotel with his boyfriend, Harry. However, secret half-brother Eric Smith has other plans and things soon spiral out of control.

It’s no secret that I love the works of Simon James Green, so when I picked this little short story up at YALC I was incredibly excited to find out what Noah got up to next. Honestly, I’m surprised it took me this long to read it!

As usual, Noah’s world spirals out of control, leading him to public humiliation and I loved it. Noah’s eccentric dialogue was as hilarious as usual, his mind capable of wonders yet none of which are believable to the situation. Reading about a character incapable of lying is always brilliant to read, but Noah’s mind is definitely one of my favourites.
Harry’s character also took a new turn in this instalment, exploring his own embarrassment as he was brought into Noah’s world. In a moment of desperation, Noah calls on his boyfriend to help him through a lie… which backfires brilliantly. However, it just showed us exactly why Noah loves him; they’re unfortunately similar with their lying techniques.
However, I feel as if this short story was ruled over by Eric, a character known for his secret schemes. His behind the scenes work finally came into Noah’s favour, as we’re given a snippet to a new sweeter side to him. A wonderful moment, and I desperate hope we’ll see more in the future!

Green’s writing style was as captivating as always, following Noah’s fast paced narrative to create a brilliant story in so little pages. All the characters were present, fully formed and believable, while the story’s climax was left at a wonderfully heartwarming moment.

Overall, this short story was everything I’d hoped it would be. It presented what I loved about all the characters in Noah’s world perfectly, with added high school drama and humour.