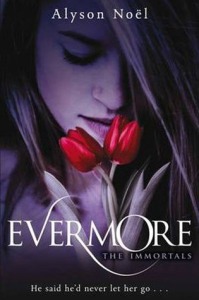 “I guess by now I should know enough about loss to realise that you never really stop missing someone – you just learn to live around the huge gaping hole of their absence.”

‘Evermore’ follows sixteen-year-old Ever Bloom after the event of a car crash that tragically killed her family. She moves to California to live with a distant relative, yet is haunted by the spirit of her younger sister and the ability to see people’s auras, hear their thoughts and know their entire life story by touching them. Desperate to escape, she retreats into herself, hoping to escape her problems by blending into the background, but new guy Damen refuses to let her.

I initially picked up this book to fulfil the ‘easy-fantasy’ read I’d been craving for a while, and needless to say, I was not disappointed.

‘Evermore’ is a cheesy, but highly addictive young adult paranormal book. It’s cliche, yes, consisting of trademark romance quips, a typical female protagonist and a message that “Love overpowers all” but you simply can’t put it down. Plot wise, it’s fast paced, with short chapters that lures you into believe no time has passed at all until you’re already half-way through the text. The simple language allows you to breeze through the novel, accompanied by the easiest characters to become accustomed to.
Ever Bloom is your standard young adult female protagonist trapped in a romance novel; a Bella Swan, if you will. She is transfixed on Damen, yet still has the ability to stand her own. Although, their relationship has its difficulties, Ever’s mature nature means she thinks through the situations and doesn’t make any irrational decisions. Her narrative was easy to follow and route for, forming this simplistic novel. However, my personal favourite character rests on her young sister, Riley. As an older sibling myself, it was very easy to fall for their relationship; there’s conflict, jibes, and teasing, yet the respect and love they have for another is clear. Plus, Riley’s smart mouth was just a joy to read.

Overall, I really enjoyed this novel. Although, it was cliche and had very few unique qualities, it was just the book I needed. It’s easy to read, love and invest yourself in, and I’m unashamed to say how excited I am to continue Ever’s story.