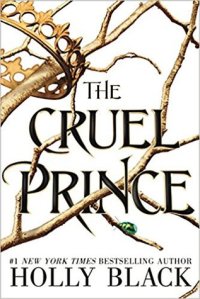 “If I cannot be better than them, I will become so much worse.”

‘The Cruel Prince’ tells the story of Jude, who was kidnapped after the murder of her parents and taken to live in the treacherous High Court of Faerie. Ten years pass, and Jude wants nothing more to belong, yet it’s impossible when being a mortal. She’s despised by those around her, but no one hates her more than Prince Cardan, the youngest and wickedest son of the High King. To win a place at the court, she must defy him, but that comes with its own consequences.

I know I’m a little late to this series, especially considering I attended an event with Cassandra Clare and Holly Black, yet knew nothing about The Folk of the Air series. However, I finally got around to it, and needless to say, I loved it.

Jude’s character was a breath of fresh air within Young Adult Fantasy. She’s brave, determined, yet flawed, and I loved reading her story. All the characters within this series are unique and detailed, adding to an already gripping novel. However, no character was more interesting to me than Prince Cardan, whose dialogue between him and Jude was gripping all the way through. It was a lovable hatred from the start, yet continued to grow into them further despising each other as the story progressed. It turned the common Fantasy relationship on its head, which was truly incredible to read. Prince Cardan, however, as the title suggests, is cruel. He’s selfish and terrible, and Holly Black is definitely determined to create the perfect anti-hero. Nevertheless, there’s more to him than meets the eye, which makes him addictive to read about.

Fairies has always been an interesting concept to me since I was young, but no book I’ve ever read has ever taken the concept of Faerie in this direction before. They’re cunning, cruel and vicious, yet that’s what makes the world Jude was taken to so interesting. Plus, taking a protagonist and placing her in the worst place she could be is the best way to start a series. Add a few (numerous) plot twists and turns and it’s practically impossible not to want to read on.

Overall, I loved this novel. It was my first by Holly Black, as I fell into the hype with this series, but it’s definitely a worthwhile read.