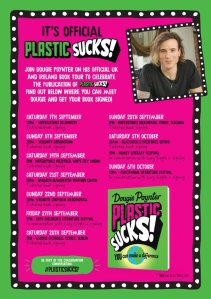 The Plastic Sucks! Book Tour was a hugely anticipated event since its announcement. However, I didn’t find out about it through social media, instead noticing a poster advertising the signing on the window of my nearest WHSmith store.
Plastic Sucks! is Dougie’s Poynter’s first solo book project, educating younger readers on the importance of caring for our planet. A wonderful little idea, which appealed to me instantly.

The event itself had a fairly small turnout compared to those I’ve attended in the past, mainly being used to those held at Waterstones. However, the queue that formed was still as enthusiastic as always, groups nervously chattering amongst themselves about the book and other projects by the author. WHSmith had an organised structure and managed to keep everyone in line, making for an all-round positive event.

The signing itself began early, Dougie already appearing in place before the scheduled time. The queue moved fairly quickly compared to those I’m used to, so I managed to reach the front in high spirits and was more than happy with the interaction I managed to have. I was admittedly nervous, having been a fan for a pretty long time, but Dougie was calm, positive and polite for the entire conversation. He complimented the patches on my jacket, immediately comforting me enough through the interaction. Although, I didn’t manage to say much, the rehearsed lines in my head useless to me, I was able to make casual conversation and have a photo taken before moving on. Overall, an incredibly relaxed event.