November is here! There’s still a mountain to be read, but I’m determined to stick to my top three priority set up before delving into the piles beside my bookcase. Besides, where’s the fun if you’ve only got a little selection to choose from? 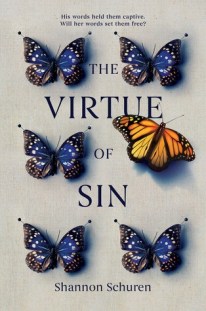 1. The Virtue of Sin by Shannon Schuren
Miriam lives in New Jerusalem, a haven in the desert far away from the sins and depravity of the outside world. Within the gates of New Jerusalem, and under the eye of its founder and leader, Daniel, Miriam knows she is safe. Cared for. Even if she’s forced, as a girl, to quiet her tongue when she has thoughts she wants to share, Miriam knows that New Jerusalem is a far better life than any alternative. So when God calls for a Matrimony, she’s thrilled; she knows that Caleb, the boy she loves, will choose her to be his wife and they can finally start their life together.
But when the ceremony goes wrong and Miriam winds up with someone else, she can no longer keep quiet. For the first time, Miriam begins to question not only the rules that Daniel has set in place, but also what it is she believes in, and where she truly belongs.

2. Dead Popular by Sue Wallman
You don’t become the most powerful girl at school by playing nice, and Kate Jordan-Ferreira is ruthless.
But when long-held secrets start coming to light, she realizes someone is playing a much more dangerous game.
If Kate keeps lying about her past, her final year at Pankhurst could be exactly that: her final year.

3. Plastic Sucks! You Can Make A Difference by Dougie Poynter
Plastic is everywhere and it sucks. It fills up our oceans, endangers our wildlife and never goes away. So it’s time to take action, find ways to cut down our plastic use and help protect our environment. Together we can make a difference!

What books are you reading this month?