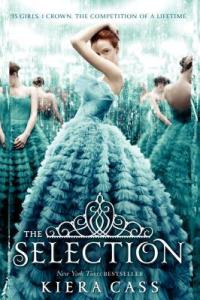 “I hope you find someone you can’t live without. I really do. And I hope you never have to know what it’s like to have to try and live without them.”

‘The Selection’ follows America Singer, one of the thirty-five girls being given the opportunity of a lifetime to live in a palace, and compete for the heart of Prince Maxon. For America, however, being selected is a nightmare.

I received this series for Christmas, having hoped for a lighthearted read to help me escape a reading slump I’d fallen into. Needless to say, I got what I wanted and more.

America Singer, although an awful name, made for a brilliant protagonist. She’s strong-willed, stuck in her ways – which isn’t necessarily a bad thing, and protective. Although, she may have been trapped in a cliche love triangle, she continues to impress as she journeys on through The Selection towards the crown. She doesn’t care what anyone thinks of her, protecting those who show her similar care along the way. She knows what she has to do and follows it, regardless of her own wants and desires.
Maxon is a similar character, knowing of his fate regardless of his own anxieties and progresses through The Selection in search of his future wife. Maxon’s character was a joy to read, easy to understand why the competitors cared so much for the Prince’s affections and continued to impress as the novel progressed.
The character who developed the most however, I felt was Aspen. Although, selfish and perceived in the wrong, he developed into a mature and strong character by the end of the novel. It was fun to read, highlighting his weaknesses before moving past them to win his loved one’s heart.

The novel itself was an incredibly easy read, with short chapters and simplistic language, ‘The Selection’ made for an wonderful little read when hoping for something light and engaging.

Overall, I deeply enjoyed this read. It was lighthearted, addictive and a joy to read, being just what I needed when seeking something to pull me out of a slump.