Note: This post contains spoilers from the Fruits Basket series by Natsuki Takaya.

I’m not a frequent romance reader, so when February comes around I find it very difficult to theme the content of this blog around Valentines. However, after searching through the past year I managed to finally find a suitable character. Last years Valentines character was none other than Tohru Honda, the protagonist of the Fruits Basket series, so it felt only natural for her partner to feature this year. Besides, it’s impossible not to fall in love with him too. 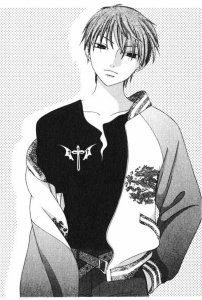 Fruits Basket was the series that introduced me to the world of manga at a young age, falling in love pretty easily with the form from that point onward. Kyo Sohma’s character was one of the main reasons for that, being an easy character to love.

Kyo’s character begins full of anger and destruction, continuously breaking the Sohma’s household with his arguments and physical fights. However, as the series progresses the development of his character is highlighted in his demeanour. He’s gentler, more sure of himself and opens up to the people around him. His love for Tohru shines through the pages of the manga, encompassing him and transforms him into a kinder, more understanding character. His love for Tohru heals his wounds and that is simply beautiful to see. For this reason, Kyo deserves a spot in this segment, showing the power of love and inner strength and the capabilities letting someone in has.

Who is Kyo Sohma?

“Maybe I’m not perfect. Maybe I have a long way to go. But someday… someday I’ll be able to stand and walk on my own. Without hurting anyone… and without being a burden.”

[To Tohru] “Be selfish, say what you want once in a while. It’s okay to let yourself be sad.”

[To Tohru] “Ever since you left I’ve been getting pissed off about everything, and because I couldn’t understand why, it just pissed me off even more!”

“The scariest and most painful thing is to be hated by someone you truly love.”

[To Tohru] “You know… you really are something.”

One thought on “Character of the Month (February ’20) | Kyo Sohma”