My boyfriend recently bought a Kindle, having wanted to get back into reading for a while now, and it got me thinking of what my personal recommendations would be. There’s so many to choose from and it took a while to break them down, but here we go. Without further ado, here are my top five Young Adult recommendations!

The Raven Boys follows Blue Sargent, a daughter of a psychic, who has been told that if she kisses her true love, they’ll die. Following an event in a churchyard, Blue is lead to The Raven Boys, four students searching for answers of their own.
The Raven Boys is a series I hold very dear to my heart, having first stumbled across it a few years ago now. Maggie Stiefvater’s writing is simply gorgeous. I adore everything about it, from her descriptions to her talent for character development. Her characters have earned spots in my Character of the Month posts a few times now, and they’ll always have a special place in my heart.

Ink is set in a dystopian world, where the population is split into ‘marked’ and ‘blanks’. The Marked are branded in intricate tattoos which tell the tales of their lives, whilst fearing those with bare skin; the blanks. Upon leaving school, Leora dreams of becoming an Inker, yet that dream doesn’t come without a price.
Ink flows beautifully from the start. It’s the perfect afternoon read, moving at a fast, easy pace which I’d recommend to everyone. The characters are believable, with gorgeous names (I will forever love the name Leora!), the plot is gripping from the start and it centres around tattooing. What more could you want from a YA novel? 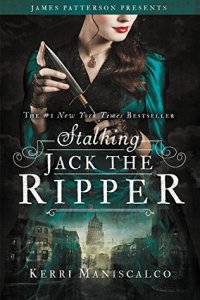 Stalking Jack the Ripper tells the story of seventeen-year-old Audrey Rose Wadsworth, an apprentice to her Uncle’s laboratory, where she practices forensic medicine. When a pattern of women end up on her table, she finds herself investing the Leather apron; Jack the Ripper.
Now, I know what you’re thinking, “really? You’re mentioning this book again?” And you’d be right, but I simply cannot recommend this series to people enough. The characters in this story rule the book. It’s full of Audrey Rose’s quick-thinking, good morals and fight-ready stance until the end. The story-line is interesting, the characters are lovable and the cover is simply too beautiful not to own multiple copies of. Get on this book!

Half Bad follows the life of Nathan Byrn, a half-code witch, who happens to be the illegitimate son of Marcus Edge; the most feared Black witch in England. The story follows his life up towards his seventeenth birthday, where each witch with inherit three gifts, allowing their magic to become fully formed. If not, the witch will die.
Anyone who has been following this blog up until now would know how much this series means to me, first discovering it in college during a time where I needed a quick escape, and Half Bad was there throughout it all. This book is full of character development from its first page, and I loved every second of this quick read.

Ace of Shades tells the story of Enne Salta, a ‘proper’ lady who finds herself in the City of Sin. When her mother goes missing, Enne must leave her reputation behind to find her only lead, a street lord and con man named Levi Glaisyer. He claims to have no time to help her whilst fighting his own battles, but her offer of compensation could be the solution to all his problems.
This book is simply perfection. I was hooked on every single word on the page from start to finish, falling more and more in love with the characters and the world they inhabit. Enne and Levi’s relationship is addictive from the get go, while the stakes continue to rise around them. Check this book out!