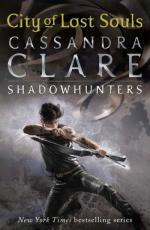 ‘City of Lost Souls’ is the fifth instalment in The Mortal Instruments series, following Clary Fray after the effects of Lilith’s magic. Bound together with her evil brother, Sebastian, her beloved Jace has become a servant of evil. The Clave are out to destroy Sebastian, but there is no way to harm one without destroying the other. She’s determined to find her love, but will he be the same person when she does?

It’s no secret to those following this blog that I’ve recently become addicted to The Mortal Instruments series, having been extremely late to the Cassandra Clare party but now I just can’t get enough. This book was no exception.

The stakes are rising now, Sebastian’s plans have been revealed and has taken Jace down with him, but Clary has just become more and more brilliant. She’s selfish on occasion, there’s no denying that, and naive and reckless, but she continues to awe the audience by enticing them from page to page. She’s unstoppable, desperate to be reunited with her love, and doesn’t care what she has to sacrifice to get it. I loved that, Clare’s language oozing out her desperation within the pages so vividly that I managed to get through this book in just a handful of days.
Jace is as tortured as always in this instalment, continuing to have situation after situation thrown his way, but as readers, we’re addicted to it.
However, surprisingly one of my favourite characters in this novel was antagonist Sebastian, finding him simply believable. He was evil, there’s no denying that, but he was enticing and methodical and intelligent. His aims made sense, and as a villain he grabbed my attention completely.

The writing itself is classic Clare language, being simplistic and easy to follow throughout, whilst the dialogue continued to humour me and draw me across the pages. Before you know it, you’re halfway through the book in one sitting. Although, his novel was a little darker than those previous, it continued to impress and remained lighthearted at times, ensuring the readers got their beloved characters across in the perfect way.

Overall, I deeply enjoyed this instalment. It was the perfect mix of light and dark, and I cannot wait to get started on the final novel in the series.