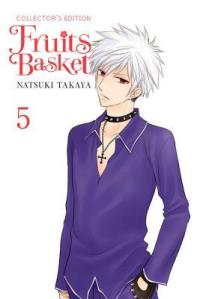 “You don’t realise, do you?
You’ve always been saving me.”

‘Fruits Basket Collector’s Edition, Vol.5’ is the fifth instalment (chapters 49-59) of Tohru’s life with the Sohma family, where the stakes are beginning to rise even higher. As summer vacation inches closer, Tohru spends her days in anxious anticipation, while Yuki meets the new student council members, and Uo-Chan falls in love. However, once summer break is in full swing, Tohru accompanies the Sohma’s to their family cottage, which comes to a standstill when an unexpected visitor arrives.

It’s no secret to this blog that Fruits Basket has been inhabiting a special place in my heart for numerous years now, having fallen in love with the world and its  characters from a young age. This instalment was no exception.

The stakes are beginning to rise even higher now, casting a shadow over all of the characters within the Fruits Basket world. Tohru Honda is aware of this, immediately taking it upon herself to fix everything, regardless of whether or not she fully understands the situation. It was admirable to see, loving the character even more than it was thought necessary as you witness her love and care.
Readers were witness to Yuki’s softer side in this volume, his relationship with Tohru developing into potentially something more, whilst still remaining in competition with Kyo. Their inner battles were heartbreaking to see, Natsuki Takaya’s talent for writing and relationship progression clear throughout.
In this instalment, we’re introduced to a number of new characters, all with their own individual flare and quirks. Those characters were immediately lovable, with their auras of mystery and comedy.

The story itself moves at a gradual pace, it being obvious that it’s leading up to something even bigger but we don’t care for the pace, readers are there for the entire ride. We’re gripped, transfixed on the characters and the creation of something so much darker than initially anticipated. The illustrations are as beautiful as always, noticing slight changes as the characters grow and age, especially with Yuki and Kyo, as they gradually get longer-faced and taller. It’s absolutely beautiful to see.

Overall, I deeply enjoyed this instalment, remembering why I adored this series in the first place. Reclaiming my love for this series has been so entertaining, and Natsuki Takaya makes you feel for these characters in such a short amount of time. It’s a true talent.