Note: This post contains spoilers from The Mortal Instruments series.

This post is yet again a little later than predicted, namely due to motivation and procrastination than anything else. I knew I wanted to finally include another female Character of the Month, but deciding on one has been a bit of a struggle. However, this month I completed The Mortal Instruments series and I was blown away by the amount of favourable characters. One in particular stood out to me. 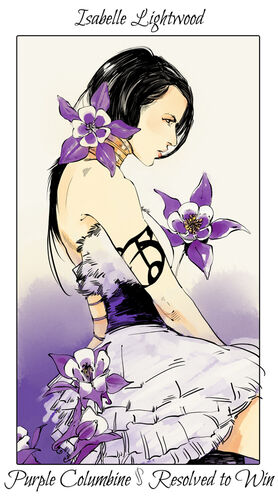 I’ll admit, I’ve only recently been introduced to The Mortal Instruments series, however, I binge read them all immediately, falling in love with the characters and the world they inhabit. However, none of them inspired me as much as Isabelle Lightwood, adoring her from the moment she was introduced.

Isabelle may act quite tough and unbreakable, however, what intrigues me most about her is her weaknesses. She might be fierce and sassy and gorgeous, however, she’s also vain, overly-confident and insecure as well. Her weaknesses make the character for me, inspiring me to realise that everyone has a vulnerable side to them, regardless of the traits they show the most. Isabelle is extremely cautious when it comes to love, fearing those around her aspire to hurt her, yet her relationship with Simon Lewis transforms that outlook in the most beautiful way. Personally, that’s why I believe their relationship is the most beautiful throughout the series, being an unlikely match yet one that develops the characters the most.

Who is Isabelle Lightwood?

“But I watch my brothers give their hearts away and I think, Don’t you know better? Hearts are breakable. And I think even when you heal, you’re never what you were before.”
City of Fallen Angels

“Stop it.” Isabelle tapped a booted food in the shallow water at the lake’s edge. “Both of you. In fact, all three of you. If we don’t stick together in the Seelie Court, we’re dead.”
“But I haven’t-,” Clary started.
“Maybe you haven’t, but the way you let those two act…” Isabelle indicated the boys with a disdainful wave of her hand.
“I can’t tell them what to do!”
“Why not?” the other girl demanded. “Honestly, Clary, if you don’t start utilising a bit of your natural feminine superiority, I just don’t know what I’ll do with you.”
City of Ashes

Isabelle rolled her eyes. “Oh, for the Angel’s sake. Look, if there’s no other way of getting out of this, I’ll kiss Simon. I’ve done it before, it wasn’t that bad.”
“Thanks,” said Simon. “That’s very flattering.”
City of Ashes

“What’s all this about yanking poor Magnus and Alec back from their vacation?” Isabelle demanded. “They have opera tickets!”
City of Fallen Angels

One thought on “Character of the Month (April ’20) | Isabelle Lightwood”